The Threshermen’s Reunion, 2017, at Austin was special for me, and my son, Peter and family. That baby Elise helped into this world in 1900, in the Palace Edwy had carefully built for his queen, Emily.  Rupert grew up and became a farmer. He bought his first tractor, a John Deere AR in 1938.  That he could buy a tractor in the depression says something about how hard Mom and Dad worked. When we bought a new farm in the forties, we sisters drove the tractor while Dad managed the 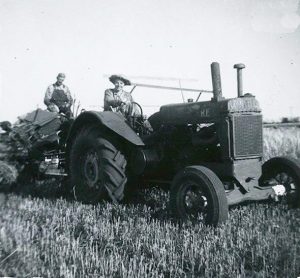 binder harvesting the wheat. There I am at 16.

When Johnny’s useful life was over Dad kept it in a little shed on his farm.

It sold at my brother’s auction to Harvey from Holland, Manitoba, who has restored it and asked Peter to drive it in the parade on Saturday.

Our Dad would be so happy to see his little ‘Johnny’  put putting along in it’s original beauty. Wonderful memories! I had a drive after the parade.

This entry was posted in Uncategorized. Bookmark the permalink.